Keno is a very simple game and is similar to the lottery or a game of bingo where the player tries to guess the numbers that will be drawn. When played in casinos, keno is usually played in the "keno lounge", an area where players can sit and watch the numbers being drawn as well as purchase and cash in their tickets at the cashier's window. There is a also a keno board which shows which numbers that have been drawn so far, as well as seats that are equipped with keno tickets, crayons, and a keno brochure that contains the payout schedule there. If you are not in the casino lounge, it may also be possible to play keno by handing your ticket to a "keno runner" who collects your tickets and delivers your winnings.

Keno is often offered outside casinos as a state lottery game and played in bars and convenience stores. These games may be video keno machines, which are similar to slot machines. Video keno games progress much quicker than regular keno games.

Keno is looked at by some as being a boring game since it is a game of chance and there is no strategy. Some people think of it as just sitting around and playing the lottery. But to be fair, it is better than that. It is more exciting because the game progresses much quicker than a lottery. You can also vary the number of spots to pick to increase the chances of getting a payout. You can play 10 spots if you want and try to win a large payout but you could also choose to play only 2 spots and look for a smaller, but more probable, payout of 9-to-1 or so. That's certainly more fun than playing the lottery and always losing.

How to play keno

Here is an actual keno ticket from the Silver Legacy caisno in Reno, Nevada. 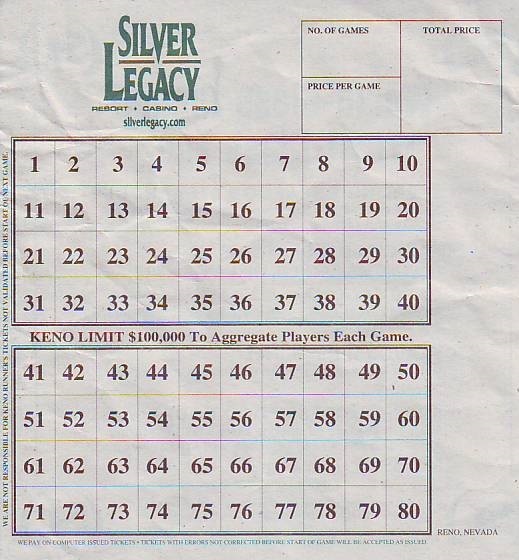